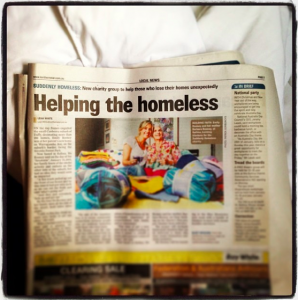 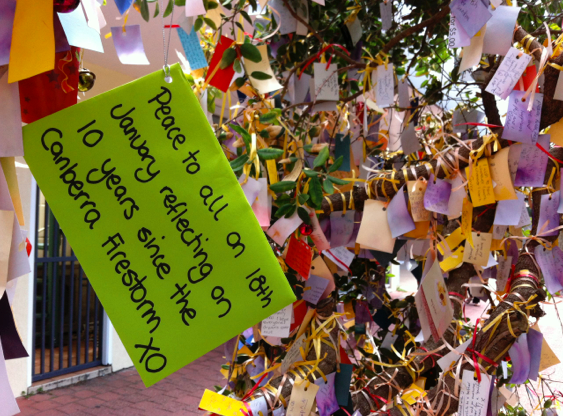 Did anyone else notice a unique wish on the Lennox Wishing Tree earlier this year? Well, we have tracked down the ‘wishers’ and it turned out to be quite a story…

The wish was hung by Emily Rooney and her mother Barbara, just before they made the journey back to Canberra for the 10 year anniversary of the 2003 Firestorm.

They had both witnessed the fire front explode into Duffy, a suburb that had been ‘home’ for over 30 years. Barbara’s house in Warragamba Ave had been directly across from the pine forest.

‘It took me many years to realize the personal impact of what I’d seen and experienced’ Emily said. ‘Even just the shock of losing so many familiar landmarks. It wasn’t just our house, and the pine forests, most of the suburb even the local petrol station were destroyed.’

A couple of years after her parents reestablished Emily made a sea change to Northern NSW. ‘I’d always been drawn to Byron but somehow had never visited. One day I jumped in my car and drove up to explore the area. I didn’t even know anyone here but the first time I drove past The Point I really felt as though I had come home!’.

Ten years on and Emily is writing a memoir about life since the fires including an exploration of home and what it really means. Her story also outlines a self help guide to coming ‘home’ after trauma and loss.

She is also keen to foster connections between people who have been suddenly homeless. ‘Losing your home is such a devastating experience and being able to connect with others who have been through it and got to the other side, is invaluable.’

So what of the journey back to Canberra and the wish?

‘It certainly wasn’t easy. Whilst Canberrans were reflecting on a day 10 years ago, many other people around the country were being threatened by fires or floods. It confirmed there is an ongoing need for positive support for people who experience these events. It made me more determined to keep going.

While I was there, I often thought about the little wish blowing in the breeze in Lennox. It reminded me how grateful I am for this whole journey, as there is nowhere else I would rather call home…’

More information on Emily’s book and project can be found at www.suddenlyhomeless.com. 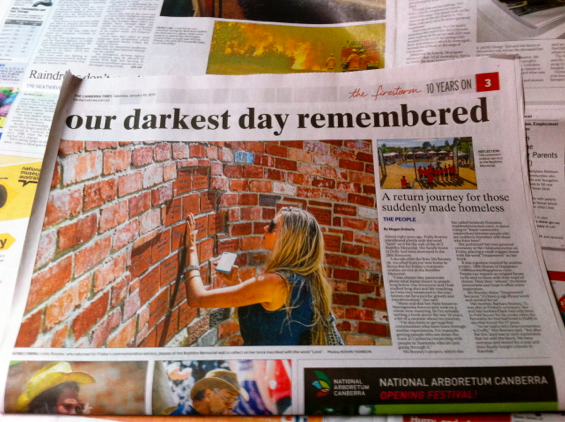 A Return Journey For Those Suddenly Made Homeless By Megan Doherty

Almost eight years ago, Emily Rooney contributed a brick with the word ”Love” on it for the wall of the ACT Bushfire Memorial. Her family home in Duffy had been destroyed in the 2003 firestorm.

A decade after the fires, Ms Rooney, 38, traveled from her new home in Byron Bay for Friday’s commemoration service at the Bushfire Memorial.

”I was always very passionate about what home meant to people long before [the firestorm] and I had studied feng shui and life coaching, so I was very interested in the way homes can be a tool for growth and transformation,” she said. 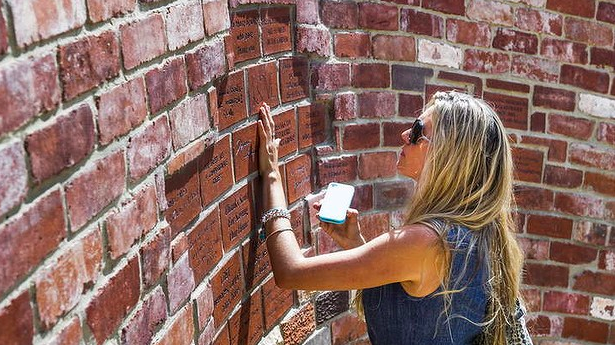 ”Mum and dad lost their house in Warragamba Avenue so it took on a whole new meaning. So I’m actually writing a book about the last 10 years, a bit of a memoir about my journey.

”I’m also keen to get together communities who have been through similar experiences. For example, getting people who are down the track in Canberra connecting with people in Tasmania who are just going through it.”

Ms Rooney’s project, which she has called Suddenly Homeless (suddenlyhomeless.com), is about trying to ”foster community connections between people who are suddenly homeless with those who have been”. 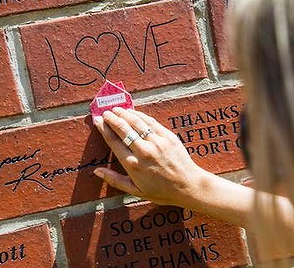 Emily’s contribution to the ACT Bushfire Memorial, a brick with the word “Love” on it. Photo: Rohan Thomson

She performed her own personal ceremony at the commemoration on Friday, placing a small origami house with the word ”Empowered” on her brick.

It was a gesture inspired by another project, 1000 Homes of Happiness (1000homesofhappiness.com). People can request an origami house to be sent to them with their word of choice. They then ”release” the home somewhere and hope it offers some inspiration.

Ms Rooney chose ”Empowered” because ”it’s been a significant word and symbol for us”.

Her mother, Barbara Rooney, 72, was also at Friday’s ceremony. She and her husband Jack had only been in their house for six weeks when the firestorm hit but had lived in Duffy in another house for 27 years.

”So we had a very close connection to Duffy,” Mrs Rooney said. ”But after the fire, land was at such a premium that we sold the block. We went overseas and rented for a year and then finally bought a house in Kambah.”